Safe Harbor International exists to glorify God; to share the hope of the gospel of Jesus Christ with people living in spiritual darkness, despair and poverty. This is accomplished through ministry, development, training and relief.

Here in the United States, Safe Harbor has been active in responding to those in crisis following these devastating disasters:

On January 17th, 1994 out of the rubble of the Northridge earthquake, the Lord called a small church to reach out to a community devastated by the 6.7 magnitude quake which resulted in 72 deaths and over 9,000 injured. The Lord showed Himself faithful as Calvary Chapel Rancho Santa Margarita set a relief center up in a church parking lot, and watched as God provided over and above anything we could imagine in the way of food, clothing, supplies, water, volunteers and thousands of desperate people, who were not only to be fed in the physical sense, but also spiritually as the Gospel was presented and souls were saved. From this outreach Safe Harbor International Relief, the missions arm of the church, was birthed.

In a horrific and cowardly act of terrorism, our world was rocked and our nation's sense of security was forever changed. Safe Harbor responded immediately with a team on the ground within 48 hours of the attack in order to reach out to the city. It was extremely difficult for the firefighters and police that had lost their co-workers to leave the pile of rubble that remained from the destruction of the buildings, and some would work for days without going home. The Lord once again used Safe Harbor to minister to those affected by this tragic event:

Hurricane Katrina, which hit in August of 2005, was one of the five deadliest hurricanes in the history of the United States. The hopelessness of the people in our own country caused an outpouring of teams that desired to show the love, grace and mercy of Christ and His glorious gospel. Safe Harbor's Action Crisis Teams (ACTs) were fortunate to respond to those affected by this devastating hurricane in New Orleans and the surrounding areas in many ways, as described below: 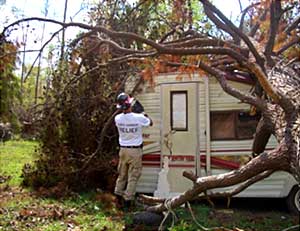 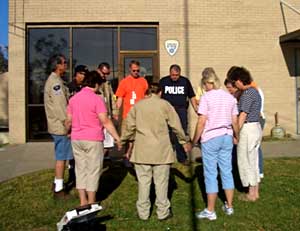 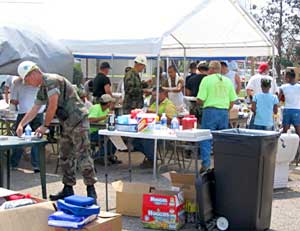 Safe Harbor responded to one of the most devastating fire crises here in the United States. Over 18,000 acres were burned, 346 homes were destroyed, 2 were left dead and over 32,000 people evacuated or displaced. Three teams were organized and over 10,000 pounds of food was made available for the affected families in the community. Safe Harbor partnered with two churches in the area, Reverence Bible Church of Colorado Springs and Front Range Alliance Church.

The people were blessed by the meals and the love of Christ was shared to all. We were also able to minister and share the Gospel to local homeless men and women in the area. Although there were many challenges in transportation, many were blessed by being served and by serving! 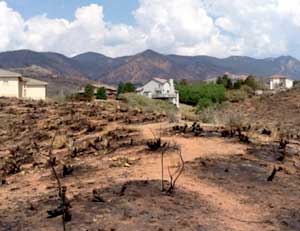 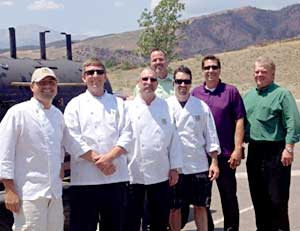 With the news of the Oklahoma City Tornado tragedy, Safe Harbor International sent out a team to respond. Below is an update written by PJ Sandavol, leading the team.

"I am assuming you received my email earlier this morning regarding the weather. However like all storms in this part of the country, weather systems blow through pretty quickly and it was sunny by the afternoon. We connected with our old church around 10:30am and attempted to immediately jump in and help in whatever way we could. Journey Church, due to its size and location, became one of the main supply hubs for donations which came on huge trucks almost every ten minutes. Jackie and I spent most of the morning unloading food and supplies off of donation trucks. The amount of stuff that came in was so incredible. We were truly able to see God's generosity. I have some pictures of the several makeshift supply rooms. I was able to speak to one of the men on the pastoral team and told them about Safe Harbor and what it was about. He told us that their most immediate physical needs are tools like snow shovels, regular shovels, work gloves, rakes, saws and generators. The disaster zone goes in phases and now they are transitioning into a clean up phase. He did say anything financial would also help. Monetary donations could be made on their website journeychurch.tv/give tagged at "5/20" (the day the tornado hit).

Later in the day we were able to join a "field team" which was a group of 30 people. We had buckets and leather gloves who were shuttled into the disaster zone commissioned to help the families at their destroyed homes with anything they needed. Their needs ranged from finding lost valuables to moving out salvageable furniture or just talking, listening and praying with folks. Jackie and I walked around with two other ladies going house to house asking people out front if they needed any help or a hand with moving stuff. Almost everyone declined our offers but we did come across this couple who was waiting for a pick up to haul away their last salvage load. We were able to listen to their cleanup efforts and what they have gone through. At the end we prayed for them and told them about the resources available at the church. After a long day walking down these streets it was pretty clear how incredibly fortunate we are to have a home with standing walls, pictures on them and little feet running around the floors. The path that the tornado took obliterated everything. One picture we have shows just a concrete slab foundation. Praise God for his sovereignty and what he is doing through all the help that people are pouring out. Please continue to pray for safety and opportunities for us to minister to these victims, our friends." 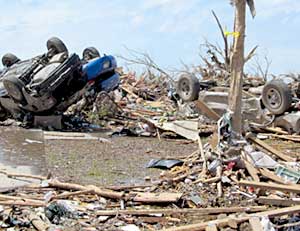 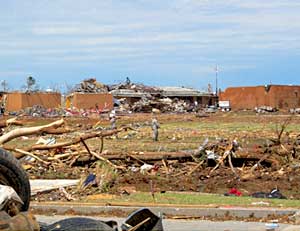 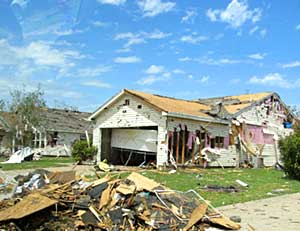